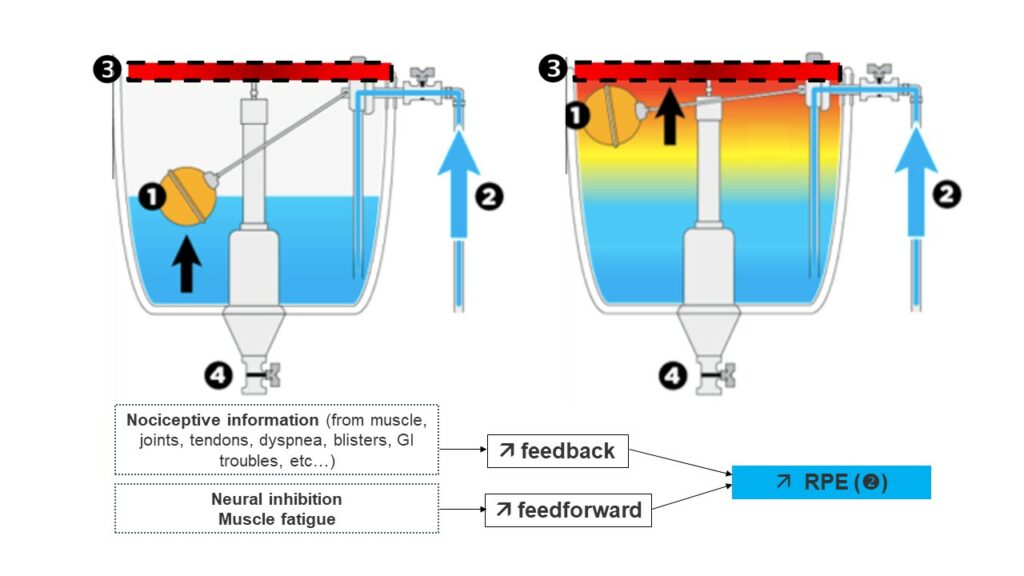 To discuss the brakes that limit us during an extreme effort like an ultra-trail, I had fun creating a small model inspired by the functioning of… a toilet flush (Millet, Sports Med 2011).

Unlike animals, we never see human beings dying from exhaustion in neutral environmental conditions. We can therefore conclude that there is a safety reserve that requires us to stop or at least to slow down when we are in the red zone. This may remind you of the ‘Central Governor’ theory popularized by the South African researcher Tim Noakes. Clearly, our brain would dictate the limits of our effort even if we feel at the time that they are muscular or cardiac limits. Let’s imagine an ultra-trail runner completely baked on the climb to Champex at the UTMB®. He is dragging himself along the trail, apparently unable to raise his pace. Suddenly a hungry bear comes out of a bush. What will happen? For sure, the ultra-trail runner in agony will find the energy to reach the Swiss station in leaping strides… A smart reader might object that there are no bears in the Valais. In that case, let’s take inspiration from Stephen King’s novel ‘The Long Walk’. For those who haven’t read it, this novel tells the terrible story of a forced march where latecomers are systematically shot in the head. It is enough to go three times below the average speed of 6.5 km/h. Bang ! Let’s imagine now that our trail runner is made to understand that, like these poor walkers, he too will be executed if he does not manage to reach the station without going below 12 km/h. We can bet that he will suddenly get his strength back. Do you think that Aron Ralsto would have cut his forearm for a medal or a large amount of money? No, we have unsuspected resources that we can mobilize when survival is at stake. Aron Ralston is the only person invited to the Leadville 100 mile race in the history of the race. In his novel, Stephen King writes, “Some of these boys will keep walking long after the laws of physics and chemistry have given up. It’s not a matter of physical strength. If it were, we’d all have a good chance. But there are weak men who can lift cars if their wives are pinned underneath. The head, the brain… It’s not man or God, it’s something… in the brain”. As far as I know, Stephen King is neither a physiologist nor Tim Noakes’ friend. However, one can hardly express better the supremacy of the brain over all the other organs when it comes to pushing one’s body to its most extreme limits. In short, our brain sets the limits of the effort with the double concern first to stay alive and second to not suffer too much.

But let’s take a look at how this flush model works. Like any flush, this one can fill up (2, that’s what happens when we get tired) and empty itself thanks to the opening of what plumbers call a drain valve (4, when we rest, and even more when we sleep, but not only). If the ball (1) plays its role, the filling of the tank (stopping the effort) is done before endangering the organism (the overflow). There is therefore a safety reserve (3) which we mentioned at the beginning of this box. I hope everyone is following. What happens when you start to run? The flush that was more or less empty fills up slowly and the ball rises in the tank because the muscle fatigue increases over time. So to maintain the same speed of movement, we must constantly recruit new muscle fibers. These in turn get tired and we soon find ourselves caught up in an inflationary spiral. This phenomenon known as ‘feed-forward’ implies a significant increase in the quantity of nerve impulses from the brain to the muscle. It is precisely this parameter that determines the sensation of effort. In short, the more impulses we produce, the more we feel we are suffering.

In addition to the ‘feed-forward’, there is another alert system called ‘feed-back’ which sends information back from the muscle to the brain. It originates in nerve fibers (called type III and IV) that are sensitive to biochemical changes in the muscle according to different types of fatigue. In ultra-trail, for example, they are activated in response to the presence of inflammation. This so-called afferent information (from the periphery to the central nervous system) also increases the perceived effort (the water level in the tank = RPE). And it is not only the muscle fibres that are involved. Let’s take the example of an ultra-trail. Where does it hurt at the end of the race? Everywhere! Tendons, joints, blisters, nausea, etc. All these unpleasant or painful/nociceptive responses do not make you want to continue. In their own way, they raise the water level. Finally, there are all sorts of emotional components. Of course, it is possible to accept, on a temporary basis, a higher level of discomfort even if you are completely cooked. This is often referred to as the ‘end spurt’. This shows that it is not, at least for endurance disciplines, the capacity of the muscle to maintain the given effort that guides the decision to stop or to slow down, but rather our will to continue and to accept more pain during the effort.

No comments to show.